Recent, shocking revelations regarding Texas Senator Ted Cruz! Ted Cruz is a Canadian citizen. Does this mean that he is not American or not completely American?  The above tweet references an article that reports the release of a story  that … 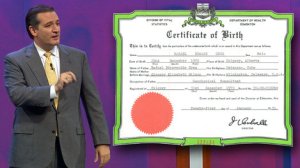 “Because I was a U.S. citizen at birth, because I left Calgary when I was 4 and have lived my entire life since then in the U.S., and because I have never taken affirmative steps to claim Canadian citizenship, I assumed that was the end of the matter,” Cruz said in a statement released Monday.

“Now The Dallas Morning News says that I may technically have dual citizenship,” Cruz continued. “Assuming that is true, then sure, I will renounce any Canadian citizenship. Nothing against Canada, but I’m an American by birth and as a U.S. senator, I believe I should be only an American.”

Cruz will have to explain in writing why he doesn’t want to be Canadian, fill out a four-page form and get clearance from Canada’s spy agency, according to Reuters. The process could take up to eight months.